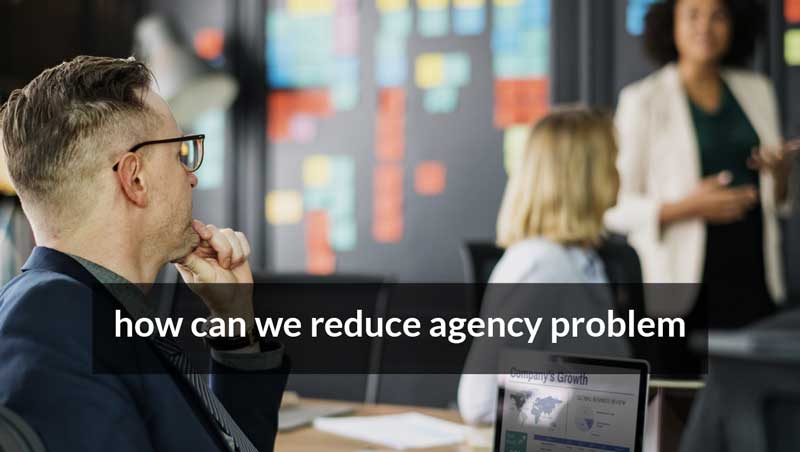 The goal of the financial manager should be to maximize the wealth of the firm’s owners. Thus managers can be observed as agents of the owners who have hired them and given them the decision-making power to lead the firm.

In theory, most financial manager would agree with the goal of owner wealth maximization. In practice. However, managers are also worried about their personal wealth, job safety, and fringe benefits. From this conflict of interest between owners and management, agency problems have occurred.

So, the agency problem refers to the conflict of interest arising between creditors, shareholders, and management because of differing goals. The agency problem emanates from the arrangement where the interest of the agent differ substantially from those of the principal because of the impossibility of perfectly contraction for every possible act of an agent whose decisions affect both his own welfare and the welfare of the principal.

How can we reduce agency problem

There are two polar positions for dealing with agency problems. At one extreme, the firm’s managers are compensated entirely on the basic of stock price changes. In this case, agency costs will be low because managers have high incentives to maximize shareholder wealth.

It would be extremely difficult. However, to hire talented manager under these contractual terms because the firm’s earnings would be affected by economic events that are not under managerial control. At the other extreme, stockholders could monitor every managerial action, but would be extremely costly and inefficient.

The optimal solution lies between the extremes, where executive compensation is tried to performance, but monitoring is also undertaken. In addition to monitoring, the following mechanisms encourage managers to act in shareholders’ interests: (1) performance-based incentive plans, (2) direct intervention by institutional investors, (3) the threat of firing, and (4) the threat of takeover.

Most publicly traded firms now employ performance shares, which are shares of stock given to executives no the of performance as defined by financial measures such as earnings per share, return on assets, return on equity, and stock price changes.

If corporate acting is above the performance targets, the firm’s managers win more shares. If performance is under the target, however, they accept less than 100 percent of the shares. Incentive-based compensation plan, such as performance shares, are designed to satisfy two objectives.

First, they offer executives incentives to take actions that will prolong shareholder wealth. Second, these plan help companies attract and retain managers who have to risk their financial future on their own abilities- which should lead to better performance.

An increasing percentage of common stock in sector is owned by institutional investors such as insurance companies, pension funds, and mutual funds. The institutional money managers have the clout, if they choose, to exert considerable influence over a firm’s operation.

Institutional investors can impact a firm’s managers in two initial ways. First, they can meet with a firm’s management and offer regarding the firm’s operations.

Second, institutional shareholders can sponsor to be voted on at the annual stockholders meeting. Even if the proposal is opposed by management. Although such shareholder-sponsored proposal nonbinding and involve issue outside day-to-day operations. results of these votes clearly influence management option.

In the past, the likelihood of a large company’s management being ousted by its stockholders was so remote that it posed little threat. This was true because the ownership of most firms was so large distributed. And management’s control over the voting mechanism so strong. That it was almost impossible for dissident stockholders to obtain the necessary vote required to remove the managers.

In recent year, however, the chief executive officers at American Express Co., General Motors Corp., IBM, and Kmart. Have all resigned in the midst of institutional opposition and speculation that their departures were linked with their companies, poor managing performance.

Hostile takeover, which occur when management does not wish to sell the firm, are most likely to develop when a firm’s stock is undervalued relative to its potential because of inadequate management.

In a hostile takeover, the senior managers of the acquired firm are typically sacked. And those who are retained lose the independence they had prior to the acquisition. The threat of a hostile takeover discipline managerial behavior and induces managers to attempt to maximize shareholder value.

What are the types of agency cost

What are the advantage and disadvantage of lease?